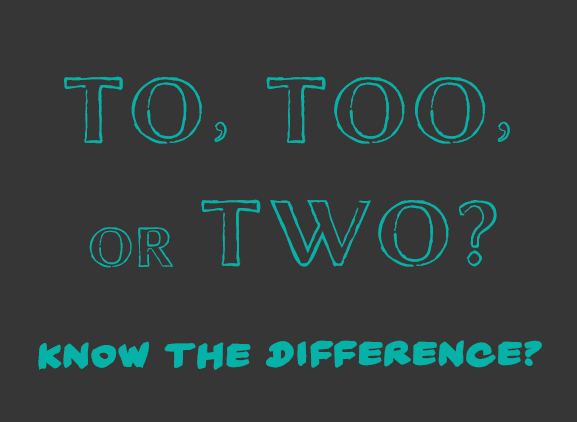 To is a word that can actually be used as two different parts of speech. As you’ll notice, it is one of the most used connecting words in the English language.

First, it can be used as a particle, part of an infinitive verb (to + root verb). Infinitive verbs are often used after another verb.

To can also be used as a preposition. As this part of speech, to is often used to describe directional movement (both literal, or physical and real, and figurative, or as an idea or metaphor).

As a preposition, to can also be used to describe moving towards something, and towards a certain time.

Too is an adverb.

It is used to describe an excess, when there is more than enough of something.

Two is the spelling of the number 2.

Like we say in English, it’s not where you’re from; it’s where you’re going to! Let’s put your skills to the test!

Barcelona is a successful soccer team because their players pass the ball so well ________ Lionel Messi.

Thanks for taking the time to read this ETO blog! What are you going to do next? Are you interested to learn more English? Why don’t you sign up for a free lesson? You won’t have to pay until lesson number two! You will be glad that you did it, too.